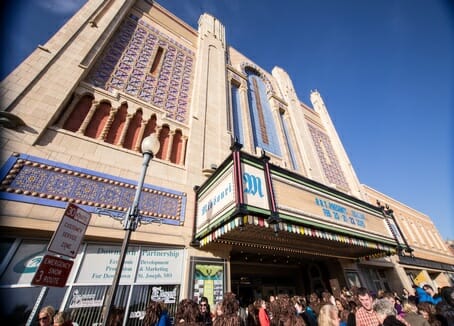 A renovated 1927 movie palace serves as Cultural Center for the arts in St. Joseph. The theater, which seats 1,200, is decorated in a pre-Persian motif. A true architectural gem.

The Missouri Theater was designed by noted theater architects Boller Brothers of Kansas City, Missouri, with sculpture by Waylande Gregory. It was constructed by the Capital Building Company of Lincoln, Nebraska for local attorney and promoter Joseph Goldman. The theater has a single balcony that looks over a house designed to resemble an open tented courtyard, decorated with details borrowed from Assyrian and Persian architecture. While the theater was principally designed for movies, it could also be used for live performances, with dressing rooms, a fly loft and an orchestra pit. It also featured a Wurlitzer theater organ.[2]

The Missouri Theater operated as a cinema until 1970. For the next few years it operated as a community theater, and was purchased by a community group in 1976. In 1978 the city of St. Joseph bought the theater for use as a performing arts center.[2] The theater and office building were placed on the National Register of Historic Places in 1979.[1] It is located in the St. Joseph’s Commerce and Banking Historic District.

The theater was renovated in 2002. A 1960s canopy was removed and the marquee was restored.