In a 1909 letter to C. Hart Merriam, Harry L. George of St. Joseph wrote, “several years ago I bought, in Portland, what was said to be a Washoe basket made by Dat So La Lee (also known as Louisa Keyser), but if she made this basket, her reputation has advanced largely since that time.” Jerome Evans, an expert on Native American baskets, is convinced that the basket Harry George purchased was “LK 1”. This basket was the first of the Dat-So-La-Lee baskets entered in a ledger created by Amy Cohn. Abe and Amy Cohn of Carson City, Nevad 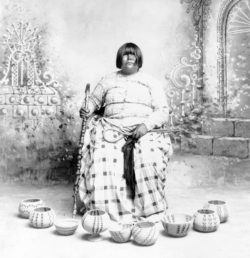 a, were Dat So La Lee’s patrons, providing her with a house, food, and clothing in return for her basketmaking from 1895 until her death in 1925 (she was 96). Harry George paid a modest sum for the basket, and he was correct, the value of Louisa Keyser’s work grew expeditiously. 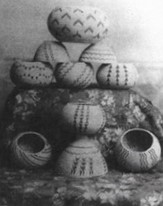 According to Evans, “Amy Cohn characteristically took liberties with basket names. As the Washoe did not do snake dances, the ‘Flowing Streams’ appears to be much more appropriate and fits the design on LK 1. Very possibly, it was the name given the basket by Louisa herself.”

Records from the Harry George collection indicate that 143/4280 was a “Basket, bowl basket, made by LaDeDalla (sic), Queen of the basket makers, Snake design (very valuable).” Dat So La Lee never repeated a design, so the snake design on LK 1 is unique. A picture of Dat So La Lee, circa 1900, shows LK 1 on the far right. The basket is also in a photograph from Cohn’s Emporium ledger on the bottom right (see photo at left).

Since serving as Board President in 2017, Dr. Robert Corder has helped the St. Joseph Museum inventory and research the Harry George Collection. After Harry George passed away in 1923, his remarkable collection was loaned by his estate to the Missouri Resources Museum in Jefferson City, Missouri, where it was inventoried and cataloged. This is where the number 4280 was assigned to the basket. The collection returned to St. Joseph in 1944 and became a permanent part of the St. Joseph Museum in 1946. It was purchased by the Goetz family and donated to the Museum as accession number 143.

How and when LK 1, also known as 143/4280, was separated from the Harry George Collection can only be speculated. Through extensive research Dr. Robert Corder has worked with Jerome Evans to track down the missing basket. It was found in 2020 in the collection of Dr. Alan Blaugrund, who had owned it for over 25 years.

“In 1995, a letter of authentication for LK 1 was written by Dr. Marvin Cohodas, who was then at the University of British Columbia and the foremost authority on Washoe basketry. The letter was likely requested by Gene Quintana, a prominent basket dealer in Carmichael, California. Presumably, the basket was then in Quintana’s possession. Alan Blaugrund, the current owner of the basket, has stated that he purchased LK 1 from another dealer, Terry DeWald, who often acted as an agent for Quintana, in or about that same year.” 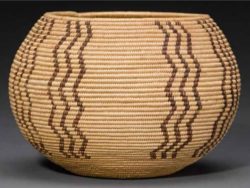 The basket that inspired Harry George’s passion for collecting Native American artifacts will be reunited with his collection at the St. Joseph Museums, Inc. It will be on display at the Museum’s 3406 Frederick Avenue location in the American Indian and History Galleries.