Robidoux returns to the “Riverbanks” 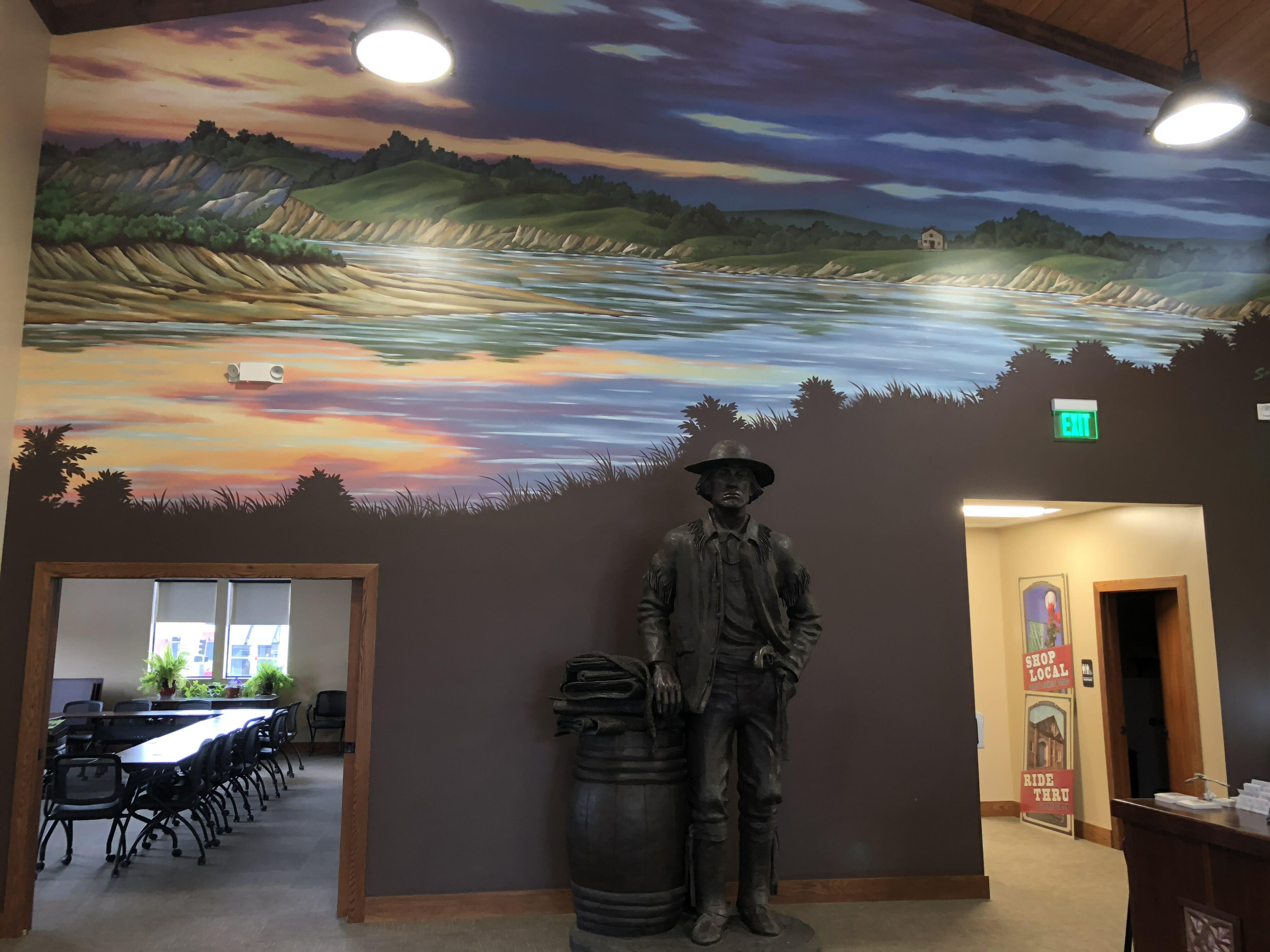 Mr. Welty was commissioned by the Buchanan County Tourism Board to paint a mural for the new Visitors Bureau that opened in August of 2017.  In December of 2017, over the course of a week, he painted “Welcome to St. Joseph”. The latest edition is Mr. Welty’s 7th mural painted in St. Joseph.

Based loosely off of a historically accurate painting from the 1800’s, this is the view Robidoux would have seen when he settled here 175 years ago.

Starting in 2013, seven murals have been painted on several downtown buildings showcasing St. Joseph’s historic past.  The first one depicts the city’s cornerstone prominence as the “Gateway to the West,” with the Western Expansion Mural.  It is entitled: “Queen of the River Towns, King of the Trails.”  The image covers the backside of 6 buildings spanning a city block and at several points exceeds 100 feet in height.

Around the corner is the Native American Mural featuring Chief Keokuk.  It depicts him peering at the settlers in the adjoining scene. The chief fought in the Black Hawk War in Illinois, along with future President, Abraham Lincoln.  Afterward, he would lead the Sac and Fox tribes but would fall into disfavor with other Native Americans because of his supporting the United States government. The other renderings in the mural are those of tribal elders.

The third mural is entitled: “Days of Civil War.”  This scene portrays the town’s early involvement in the American Civil War, consisting of the train wreck on the Platte River Bridge at the hands of guerrillas, the Union fortification called Ft. Smith atop Prospect Hill, the Provost Marshal’s headquarters in the Patee House Hotel, along with Union Troops.  Lastly, there is an image of President Abraham Lincoln, who visited the city twice in 1859.

The fifth mural is on the north side of the Bolin Hydraulic Building at 9th & Penn Streets, directly west of the Pony Express National Museum.  Its theme is the progression of the community as a western transportation hub for the country prior to 1860.  The painting portrays Jonny Fry as the first Pony Express Rider, followed by a stagecoach and a period locomotive.  In 1859, St. Joseph became the western terminus of nation’s railroad leading in part to the Pony Express, which carried the mail to Sacramento, California.

Mural 6 features the Castle at Krug Park.  The land comprising the park was deeded to the City by the Krug family.  For many years, the Castle served as administrative offices and even provided a zoo with a bear on display.  The park is a beautiful setting, where families can picnic, view special events and occasionally hear a concert.

Sam Welty of Virginia Beach, Virginia is the mural artist.  He is well known on the east coast for his many renderings and has painted numerous unique impressions.  As an aside, he also uses chalk as a medium.  With many of his paintings, he allows the public and children to assist in their creation.  The special thing about Sam is his versatility, or the ability to paint any image, as opposed to being tied to a certain genre.

About the Joseph Robidoux bronze:

Native Missourian, Joe Beeler (1931-2006) is widely known throughout the contemporary western art world. His works appear in well-known museums such as the Whitney Museum of American Art in New York City and  The Cowboy Hall of Fame in Oklahoma City.

Beeler sculpted our Founding Father, Joseph Robidoux out of bronze.  The sculpture weighs roughly 1,200 pounds and had been on display at the Riverboat Casino and at our secondary Visitors Center before coming to this new facility in February of 2018.

It took the construction team several days to hand build a crate and pack it with 18 bags of packing peanuts to safely transport him, as there was concern he would crush under his own weight.  The move went without a hitch and Joseph has been standing in front of the mural “Welcome to St. Joseph”.