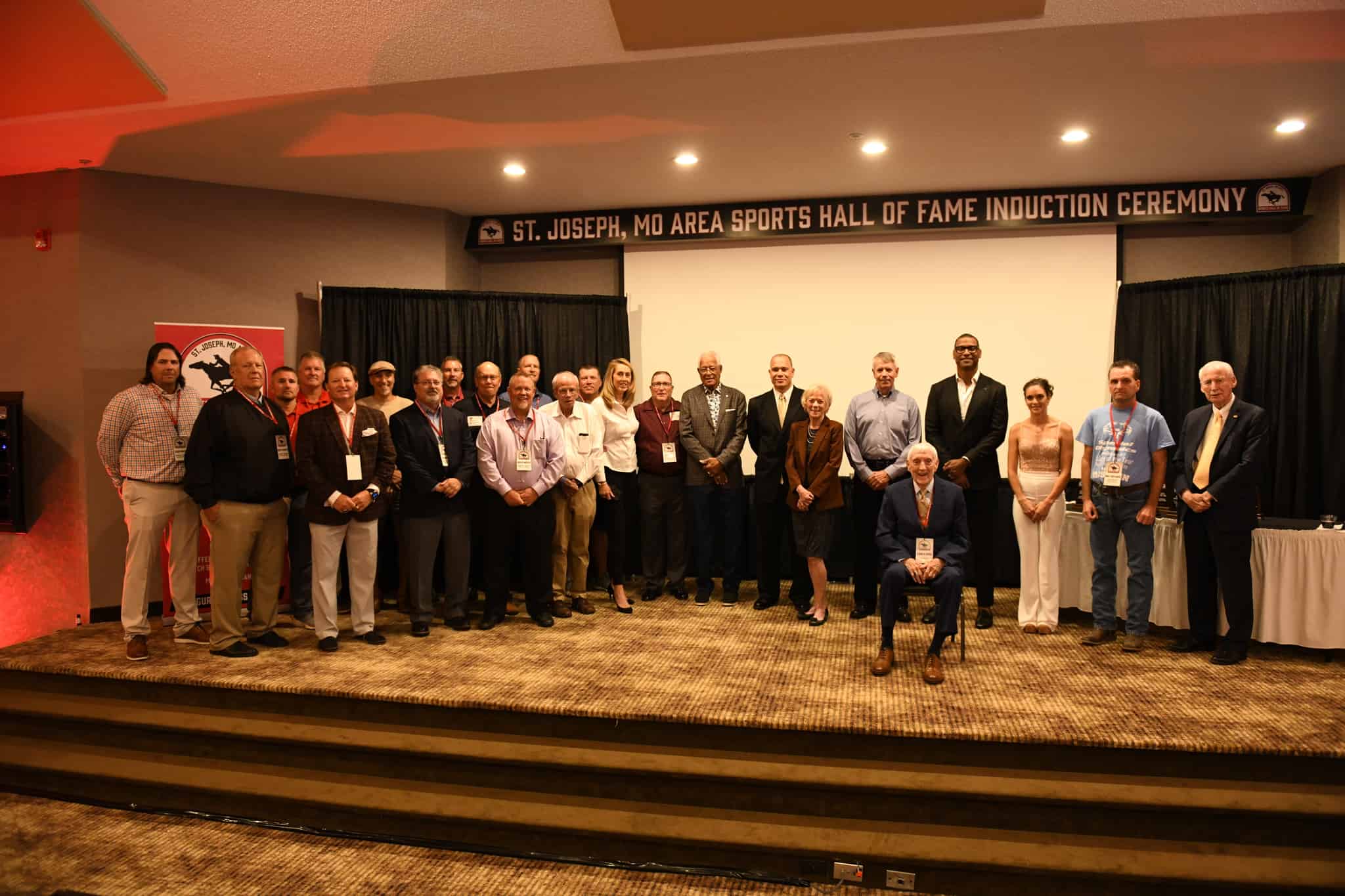 Officially created in November of 2020, the St. Joseph Area Sports Commission recognizes those individuals, families, teams, entities, or significant feats/accomplishments that have made a significant impact on sports history in Buchanan County.

Wes Barnett – Olympic Weightlifter
Wes Barnett grew up in South St. Joseph, attending Benton High School and was a standout student-athlete, including being named All-State in basketball. While a student at Johnson County Community College, Wes was a National Collegiate Champion and National Junior Champion in the 90kg weight class in which the team was crowned National Champions in 1989 and 1990. Barnett was a two-time US Olympic Team (1992 & 1996) who reigned over the US Heavyweight Division of USA Weightlifting for 10 years, 8 of those years as a National Champion. Additionally, Barnett earned both a Silver and a Bronze Medal at the 1997 Championships in Thailand and won Gold, Silver, and Bronze at 3 Pan Am Games. Following his career, he became the Executive Director for the US Weightlifting Federation and in 2006 became the Director of Sport Performance for the United States Olympic Committee. Wes is a member of the USA Weightlifting Hall of Fame and the National Association of Collegiate Directors of Athletics McLendon Minority Athletics Administrators Hall of Fame.

Byron Browne – 10 Year Major League Baseball Veteran
Byron Browne was born in St. Joseph, Missouri and is a 1960 graduate of Central High School. While at CHS, Byron was a three-sport star earning All-City and All-Conference honors in all three sports, including a 1st Team All State honor. Following High School, Byron played baseball at St. Joseph Junior College and was drafted by the Pittsburgh Pirates in 1962. He played 10 seasons in the Major Leagues for the Philadelphia Phillies, Chicago Cubs, St. Louis Cardinals, and the Houston Astros. He was recognized as a Topps All-Star Rookie in 1966. He also owns a minor league record of hits in 14 consecutive at-bats.

Charli Burri – MWSU’s First Athletics Director
The “Godfather of Griffon Athletics,” Charlie is a native of St. Joseph and a graduate of Christain Brothers High School, St. Joseph Junior College, and Northwest Missouri State University. In 1967, Charlie became MWSU’s first Athletic Director helping start many Griffon sport programs along with being the chair of the Physical Education Department, head basketball coach, and head golf coach. He was instrumental in helping to form Missouri Western’s first athletic conference – the Central States intercollegiate Conference. He brought the first football team to Missouri Western, founded the Gold Coat Club, and was the driving force behind the building of Spratt Memorial Stadium, and the MO Looney Athletic Complex. He was the first inductee into Missouri Western Athletics Hall of Fame and is also member of the National Association of College Athletic Directors Hall of Fame and the National Association of Intercollegiate Athletics Hall of Fame.

Newt Hillyard – Founder of The Hillyard Companies
Newton S. Hillyard was the founder of the Hillyard Companies. Hillyard was one of the many early players who used his talents to help develop the game of basketball away from the court. His son, Marvin, approached him to sponsor a basketball team in the 1920’s and in typical N.S fashion, he poured all his efforts into it striving for success and looking for new challenges to expand, improve, and promote the sport. He developed wood gym floor coatings that were durable, easy-to-maintain, and offered his players a sure-footed surface for winning. N.S. continued his work to make basketball a prominent indoor sport. To help develop his revolutionary new coatings and give his team a home court to display their talents, he erected a new plant and office building in 1920 here in St. Joseph that included a 90’ by 140’ wood floor gymnasium on the top floor of the building was then the largest gym floor west of the Mississippi River. He used the floor to perfect his world-class, wood gym seals and finishes, and his team supplied the grueling tournament lay needed to test his new invention. His team, the Hillyard Shine-Alls, won the 1925 and 1926 National AAU Basketball Championship. The basketball legacy left by N.S. has continued with Hillyard support of the NCAA, NAIA, NABC, the National Basketball Hall of Fame, and many other basketball associations.

Julius Hochman – Father of Boys Baseball in St. Joseph
Julius Hochman is the Father of Boys baseball in St. Joseph and is also a member of the Missouri Sports Hall of Fame. Started as Little League with four teams in the early 1950’s, the program became Boys Baseball, with seven leagues each for boys 6-7, 8-9, 10-11-12, plus leagues for other youth up to 21. By the 1960’s the program had more than 2,000 youths, with no registration fee. All were free, and if a boy didn’t have a glove, Julius got him one. He lined up sponsors, recruited service clubs (Lions, Kiwanis, Rotary, Optimist, etc.) to sponsor individual leagues, providing volunteers for umpiring and general supervision. Girls were added to the program in the 1970’s. In honor of his efforts, the city has a ballpark named in his honor.

Terin Humphrey – Two Time Olympic Medalist in Gymnastics
Born in St. Joseph, Terin Humphrey is one of the USA’s most elite gymnasts. She began her career training for Olympic Glory in St. Joe before moving to Blue Springs at age 11. In 1999, she hit the scene with a statement finishing third at the All-Around the US Junior Olympics Western Regional, Level 10 held in Austin, Texas and then finished second at the US Nationals the following year. She became a member of team USA in 2001 in which the team won the Gold medal at the World Championships in Anaheim, California. She won two Olympic medals in Athens in 2004, a Silver medal in the team competition and an individual Silver on the uneven bars. After the Olympics, she went on to star at the University of Alabama winning two National Championships on the uneven bars and garnering 11 College All-American honors in her career with the Crimson Tide from 2005-2008. She is a member of the USA Gymnastics Hall of Fame as well as a 2016 inductee of the Missouri Sports Hall of Fame.

Henry Iba – Naismith National Basketball Hall of Fame Coach
Born in Easton, Missouri, Henry “Hawk” Iba is a basketball coaching legend and college athletics administrator. He served as the Head Basketball Coach at Northwest Missouri State Teachers College, now known as Northwest Missouri State University, from 1929 to 1933; the University of Colorado from 1933 to 1934; and Oklahoma State University known as Oklahoma A&M prior to 1957, from 1934 to 1970, compiling a career college basketball record of 751-340. He led Oklahoma A&M to consecutive NCAA Basketball Tournament titles, in 1945 and 1946. Iba was also the Athletics Director at Oklahoma A&M / Oklahoma State from 1935 to 1970 and the schools head baseball coach from 1934 to 1941, tallying a mark of 90-41. As head coach of the United States men’s national basketball team, he led the U.S. to the gold medals at the 1964 and 1968 Summer Olympics. Iba was inducted into the Naismith Memorial Basketball Hall of Fame in 1969.

Cheri Kempf – Softball Pioneer
Cheri Kempf is a legend in many aspects of the sport of softball. Born in St. Joseph and growing up in Agency, Missouri, she began her decorated career pitching Mid-Buchanan High School to an undefeated State Championship season in 1980. She then took her talents to Missouri Western State University where she was a three-sport athlete (softball, basketball, & tennis). In 1982, as a freshman, she helped the team win the institution’s only National Championship across all sports, being named the tournament’s Most Valuable Player Award, pitching 24 scoreless innings in four games. She finished her collegiate career as a three time All-American She played competitive travel softball every summer since the age of nine and was honored to complete her career playing with the world renown Raybestos Brakettes out of Stratford, Connecticut. Other highlights include a Gold medal at the Olympics Sports Festival in 1991 and was a member of Team USA traveling to China and Japan winning the World Cup in Beijing, China in 1992. She is a five-time Hall of Fame recipient being inducted into the NAIA Hall of Fame, Missouri ASA Hall of Fame, twice into the Missouri Western Athletics Hall of Fame, and the first woman inducted into the St. Joseph Baseball Hall of Fame. Today, she still continues with the Amateur Softball Association and the United States Olympics Committee and is a color analyst for fastpitch softball on ESPN and Fox Sports to name a few networks she appears on.

Mike Rucker – Nine Year National Football League Veteran
Mike Rucker went to Benton High School where he was a multi-sport athlete (football, basketball, & track.) He earned multiple All Conference, All-District, and All-State recognitions in all three sports. After considering multiple Division I offers, he accepted a football scholarship from the University of Nebraska, where he played from 1995 to 1998, two of which resulted in National Championship seasons. As a senior, he was named second team All Big-12. He finished his college career as Nebraska’s fourth all-time tackler behind the line of scrimmage. He was drafted in the second round of the 1999 NFL Draft by the Carolina Panthers. He played nine seasons with the Panthers, ending up with 331 tackles, 55.5 sacks, 16 forced fumbles, and 7 fumble recoveries. He is a two-time NFL Defensive Player of the Month and was selected to the 2004 Pro Bowl team. Mike was inducted into the Nebraska Cornhuskers Hall of Fame in 2018.

Bill Snyder – College Football Coaching Legend
Born in St. Joseph, Coach Bill Snyder is one of the greatest coaches to ever grace the college football sidelines. Coach Snyder, a 1957 graduate of Lafayette High School, served as the head football coach at Kansas State University from 1989 to 2005, and again from 2009 to 2018. He retired for the second time on December 2, 2018, and is currently serving as a special ambassador for the athletics department. Snyder was inducted into the College Football Hall of Fame in 2015, and won several conference and national coach of the year awards. He was the head coach at Kansas State for the program’s 300th, 400th, and 500th all-time wins. In recognition of his contributions to the program, Kansas State has named its home field the Bill Snyder Family Football Stadium and Snyder’s name also will live forever in his home town with the Bill Snyder Pavilion which sits in Spratt Stadium on the Missouri Western State University campus. Snyders career coaching record is 215-117-1.

Mike Grossman – Special Olympics Area Athlete of the Year
Mike is a St. Joseph native and Lafayette High School Graduate who has been involved in the Special Olympics for 35 years. Mike has participated in several sports such as bowling, softball, and basketball. During his many competitions he has brought home several medals, but he is best known for his participation in Track and Field. Mike is a long distance runner with a very even pace. He was chosen to attend the 1999 Special Olympics World Games in North Carolina as part of Team Missouri to compete in Track and Field. There were athletes from around the world that Mike competed against, and competed he did; he brought home a fourth place award, a bronze medal, and a gold medal. Mike still competes in Track and Field today. As he has gotten older, he decided to hang up his softball cleats and become an assistant coach with his mom to which they coach the St. Joseph Sluggers Special Olympics team. Mike is very considerate and very caring of all his fellow teammates.