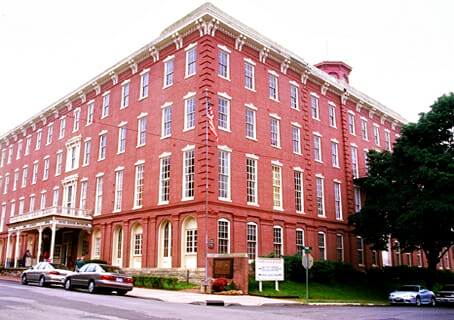 St. Joseph is known for the start of the Pony Express and the end of Jesse James, and Patee House played a role in both. Patee House is St. Joseph’s only National Historic Landmark. It has been listed by True West magazine as one of America’s Top 10 Western Museums in 2008, and it is one of 1,000 Places to See in the U.S.A. & Canada Before You Die.

Built in 1858 as a luxury hotel, Patee House served as the Pony Express headquarters from 1860 to 1861. It is one block away from the home of infamous outlaw Jesse James, where he was shot and killed by Bob Ford. After his death, the James family stayed and were interviewed in the hotel.

Patee House Museum features two full floors of exhibits. Inside Patee House, you can climb aboard an 1860 train and ride the vintage “Wild Thing” carousel. The museum also houses an 1877 railroad depot, stagecoach, cars, trucks, fire trucks, wagons, buggies and carriages, Jeeps, a racecar, horse-drawn hearses and a real gallows, a blacksmith shop, dressmaker’s shop, model railroads, antique furniture and toys, a wing with Western art by artist George Warfel, and a wing designed to look like the Streets of Old St. Jo in the 1860s-1880s.